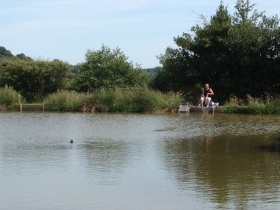 Ken Bowers “Catching Some Rays” as well some nice carp

A baking hot day and no fish were moving about on Blake Hall’s capricious Pool . It was looking like the best result was going to be a sun tan. Locating the fish is often the secret of a good catch in testing conditions in extreme heat as well as cold. Surface cover was where the fish were to be found whether that be a patch of blanket weed or on the edge of wind driven flotsam. Picking the carp off up in the water on the edge of any surface cover helped build some decent weights. Derek Taylor’s 32lb 11oz pushed Neville Duke into second place and prevented him from picking up his “Hat trick”.  After Neville’s “back to back” wins at Carney’s and Willows. with top weight for the season, a Hat Trick of wins – would have just been  “showing off”.

This site uses Akismet to reduce spam. Learn how your comment data is processed.